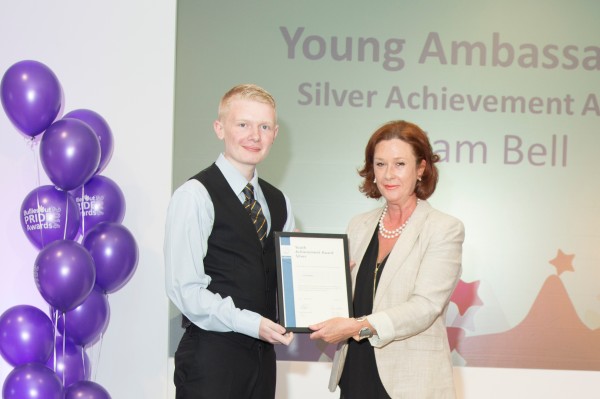 Anti-bullying charity BulliesOut is delighted to announce that one of their Young Ambassadors, Liam Bell has been honoured with the Diana Award. The Diana Award, set up in memory of Princess Diana’s belief that young people have the power to change the world for the better, has Prime Minister David Cameron as Patron and the support of the HRH Duke of Cambridge and HRH Prince Harry.

Liam, age 16 from Stanley, County Durham received the Diana Award for his work with BulliesOut and being a ‘Diana Anti-Bullying Champion’ in his local community.

As a BulliesOut Young Ambassador, Liam has taken part in many anti-bullying activities such as mentoring, raising awareness of bullying, fundraising, and giving talks to community groups.

Linda James MBE, CEO of BulliesOut: “We are extremely proud of Liam. The Diana Award will encourage him to continue his fantastic anti-bullying work and will hopefully inspire others to take a stand against bullying. Liam is delighted to receive an award in recognition of raising awareness of bullying and supporting those who are bullied in the community.

Since 1999, the Diana Award has recognised over 44,000 young people who have made a difference in their communities and positively impacted the lives of others. The Diana Award believe that young people should be encouraged for their contributions to society and empowered to reach their full potential.

Tessy Ojo CEO of the Diana Award said: “The Diana Award is proud to recognise anti-bullying ambassadors, like Liam who have the confidence and courage to stand up for what they believe. The Diana Anti-Bullying Award is presented to inspirational young people who have made a positive difference in the communities. With a growing network of over 44,000 Award Holders, we are building a force of young people who are committed to take social action and improve their local communities.”

BulliesOut provides help, support and information for individuals, schools, youth and community settings affected by bullying. Their work directly addresses bullying, one of the core reasons affecting the emotional, social and academic well-being of our young people today.