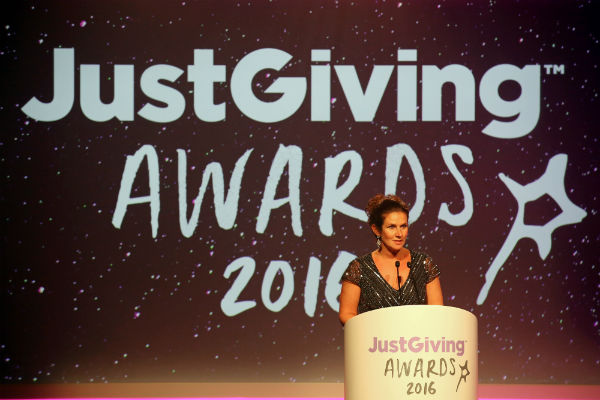 Rhian Burke, founder of child bereavement support charity 2 Wish Upon A Star has been awarded the JustGiving ‘Outstanding Commitment to Fundraising’.

The global online social platform for giving said that the award is the platform’s highest accolade, and that Rhian scooped the prize following an outstanding number of public votes.

With award categories ranging from Creative Fundraiser to Celebrity Fundraiser, the awards are seen as a valuable way of recognising those who use the website to make a real difference to the causes they care about.

Speaking after the award Rhian said: “I’m speechless! I’ve been in a room full of incredible people, all doing wonderful things and helping some amazing causes. There’s been lots of tears and lots of laughter, and I am truly humbled to be amongst such passionate people.

“I lost my husband and my son in 2012, and I thought my life was over. I still have difficult days today, and I always will, but I wanted to make a difference. Thanks to people believing in me, and the support of the community, we were able to turn 2 Wish Upon A Star into something tangible, a real charity that not only talks about the need for support, but is able to provide it. Our work is by no means done, but the partnerships we have formed, and the support we now offer is making a positive difference to families when they need it most.

“I want to thank everyone who voted for me; I think this award and what the JustGiving awards in general tell you is that if you believe in something, and you want to do something, get out there, do it and make a difference.”

Having raised over £400,000 through the JustGiving website, 2 Wish Upon A Star uses the funds to work with families, hospitals and police forces across Wales to improve immediate bereavement support after the sudden loss of a child.

The JustGiving awards have been held annually since 2010 and were launched to highlight people, charities and teams that have shown significant commitment to fundraising within the previous year.

Commenting on the awards, Zarine Kharas, chief executive and co-founder of JustGiving said:

“Every one of our finalists has an amazing story to tell, and it is those stories that make the JustGiving Awards so special. We give to friends and family, to colleagues and neighbours, to honour memories, celebrate survivors, and light up hope.

And thanks to technology, more of us give to complete strangers than ever before, because we have been moved by their story, and supporting their cause provides a way to show that we care.

Through our amazing finalists and their inspiring stories, we can see the power and impact human connections can have on good causes and we are privileged to celebrate that tonight at the JustGiving Awards.”