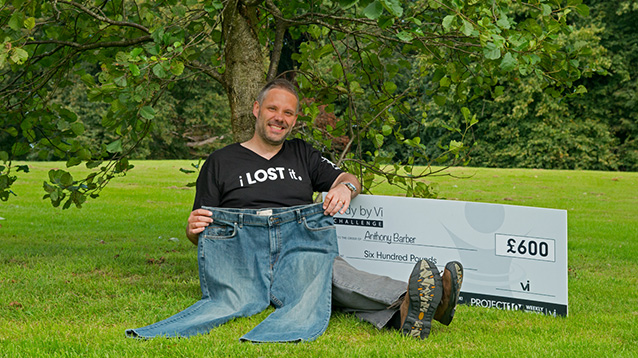 A South Wales man has lost nearly two stone in weight without exercising, instead deciding to focus on changing his diet and lifestyle –scooping a £600 prize in the process.

Anthony Barber from Brynna in RCT lost the weight over a period of 60 days from simply changing the way he ate and his approach to food; resulting in an underlying medical condition clearing. The prize money came from a diet plan called Body by Vi, which is operated by an international organisation called Visalus.

Anthony, who runs a photography business, said ‘‘I was aware that I’d put on several stone in recent years due to a sedentary lifestyle and a lack of exercise. I thought I was eating reasonably healthily but can now see that I wasn’t. For a number of years I suffered with persistent back pain and have been taking daily Omeprazole tablets to control stomach acid. So I was determined to lose the weight to help me get rid of the back pain and reduce my dependence on the tablets.’’

Anthony’s doctor reviewed his prescription as recently as January but the decided was made not to reduce his dosage due. Since dieting, Anthony has experienced increasingly less pain in his back and as an added bonus, has stopped taking the tablets completely with his doctors’ approval.

‘‘My motivation for starting the diet was to stop the back pain which was being caused by the weight of my stomach putting strain on it. The added bonus, which I wasn’t expecting, is that I no longer need the tablets to control stomach acid.’’ Said Anthony, 47.

Explaining the choice not to exercise he said ‘‘Seven years ago I lost a similar amount of weight through exercise. However, I ended up needing extensive physiotherapy on my ankles and surgery on my knee. Therefore, I stopped exercising and the weight piled back on.’’

Anthony stuck to a strict diet of healthy shakes and sensible portions to aid his weight loss.

Speaking of his long term aims and the effect the weight loss has had on his life, Anthony said ‘‘This diet has had a massive change on my life. I have so much more energy, feel healthy inside and thoroughly enjoy the products.’’

He continued ‘‘My long term goal is to remain healthy and keep to my target weight (once achieved) – cut out the yoyo dieting. I will continue to drink the shakes each day as the routine they create makes eating healthily so easy.’’