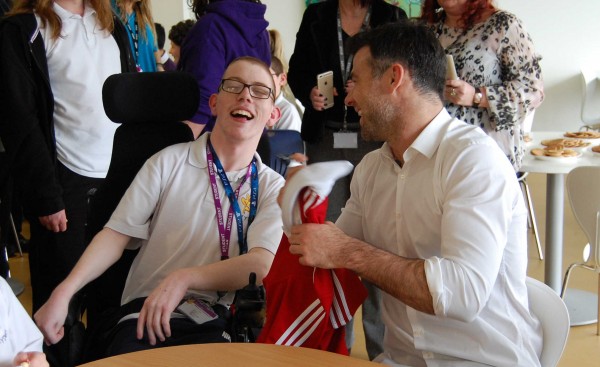 Mike has helped to support one of their pupils in particular, Luke Walsh, whose dream was to meet his sporting heroes. Mike was able to help to make this dream come true by arranging for Luke to have tickets to a Wales International Rugby match and to meet not only Mike but the whole Wales Team at a Captains Run event at The Millennium Stadium with several other pupils from his school.

Luke was so pleased that the charity and Mike had helped him to achieve his dream, that he decided he wanted to give something back to the charity to help other young people achieve their dreams too.  Luke decided he wanted to hold a non-uniform day at Ysgol Y Deri as a fundraiser for Follow Your Dreams.  This took place on Friday 13th February 2015 and was a great success with Luke and his school raised an amazing £222.00 for Follow Your Dreams.

“It’s absolutely fantastic to see one of our ambassadors fundraising for the charity after having received a dream from us,” said Diane Blackmoore, Chief Executive of Follow Your Dreams. “This shows how much Luke cares for others; he is a brilliant ambassador for the charity. We will be using the money he raised to make the dream of another child come true at Luke’s school.”

During the visit two beautiful artworks were unveiled that 35 pupils from the school, including Luke’s class, had worked on. Follow Your Dreams had arranged for local artist Heather Jones to run painting workshops with pupils from primary and post-16 classes.

“It was a wonderful experience,” said artist Heather Jones. “I was blown away by how much the children engaged with the project and how keen they were to have their say. They should be extremely proud of all their hard work.”

The landscape and a seascape inspired by the local environment have now been put on display in the Ysgol Y Deri’s new school dining hall.

Mike Phillips said: “It was really great to be able to come back to see the pupils at Ysgol Y Deri again, to see how they’re getting on and to see their fantastic paintings displayed. I think it’s absolutely amazing that Luke wanted to fundraise and give something back to Follow Your Dreams to help other young people, he’s a great guy!”

The pupils from the school were all thrilled to get the chance to meet Mike and he happily signed autographs for the children and posed for pictures.

“I think that the pupils were overwhelmed to meet Mike and we’ve had a great turn out.” said Alison Wilde, who organised the art project at Ysgol Y Deri. “The painting project was a huge success and all the children thoroughly enjoyed it. Heather was lovely and it was absolutely great working with her.”