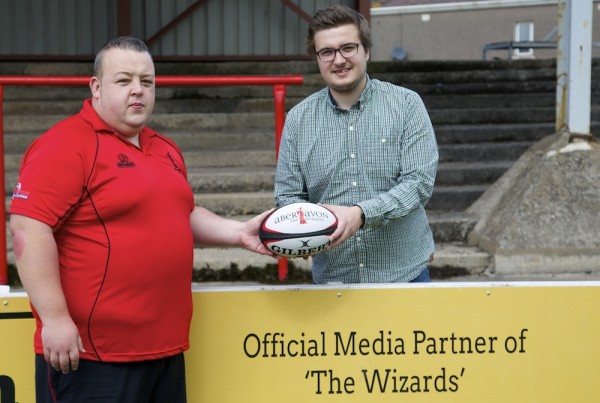 Port Talbot based media production company, Buffoon Film and Media and its sister company GoBuffoon have shown their support for the local community by partnering with the Aberavon Wizards.

“We are keen to develop strong links with the community,” said Adam Amor, Director of Buffoon Film and Media. “Aberavon RFC has a long standing relationship within the people of Aberavon and we were keen to help them develop premiership rugby in the area and support the grass-root rugby projects that they run.”

The partnership has been made in addition to the marketing efforts of the club which has developed a strong YouTube following with regular content being created by Buffoon Film and Media from fixtures and community events.

“It’s really important for businesses to support their community,” continued Mr Amor. “As a business, we love to give back to the community when we can whether it’s through sponsorship or lending a helping hand with our services. I grew up as a keen Neath supporter when the Premiership was doing really well. Audience figures are nowhere near where they were when I was younger which is why we decided to help out Buffoon’s local rugby team. “

Gareth Howells Commercial Manager for the Wizards said “We are delighted to be working for the second season with Buffoon as our media partner, they bring a professional edge with their creative content and commitment to the community”. The club have been very active with fundraising efforts recently and held a Bake Off for Comic Relief that was filmed by Buffoon Film and Media.

Buffoon Film and Media are a bilingual video production and consultancy company based in South Wales. They blend creativity with the latest technology to produce effective videos to create content that is unique and engaging. They specialise in promotional videos, training videos, event filming, wedding videos, workshops and social media consultancy.