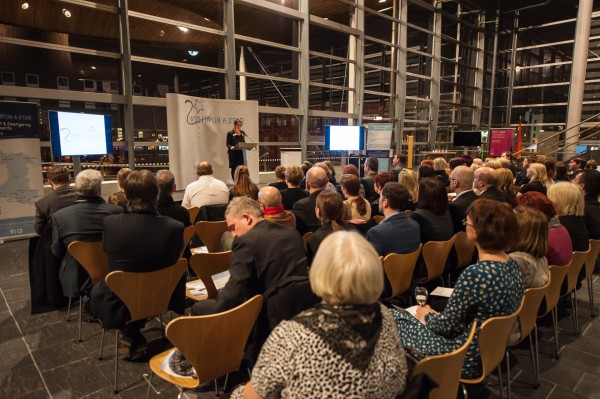 Figures from the NHS and Police forces in Wales came together at the Senedd on Tuesday night to discuss how a South Wales-based charity has influenced policy reform and procedures within both organisations.

Welsh bereavement charity 2 Wish Upon A Star held an event at the Senedd in Cardiff Bay on Tuesday 25th February to thank its supporters and to outline the organisation’s plans for the future. Speaking at the event were figures from local government, South Wales Police, Dyfed Powys Police and the NHS.

Exactly three years has passed since the double tragedy that inspired the launch of the charity; with founder Rhian Burke losing her baby boy George followed by the death of her husband Paul. Mrs Burke has used the pain of the loss of her son and husband to raise money for the improvement of bereavement services for families who have suffered the sudden loss of a child. The money raised for the charity goes towards helping those who are in need of immediate shock and trauma support and to improve the bereavement facilities in local hospitals.

The evening opened with entertainment from local Welsh choir Cor Tadau Trisant followed by an introduction to the event from sponsor Mick Antoniw AM.

Detective Superintendent Paul Hurley, who was involved in the cases of both losses, addressed the audience and underlined the impact the charity has had on procedures: ”Rhian’s family was a close knit unit – so that really does demonstrate the severity of the trauma suffered by all involved after the loss of George, then Paul. When we heard that Rhian had set up the charity, we were extremely eager to engage the charity’s advice. It has been obvious from the start that processes need to be clearer, understanding and more sympathetic. I’m pleased to say that all of our family liaison and child death policies, as well as a course for families who have suffered the death of a child, have been adapted with the input of Rhian and 2 Wish Upon A Star.”

Det. Supt. Hurley’s colleague Detective Inspector Anthony Evans of the Major Crimes Team at Dyfed Powys Police echoed his sentiments: ”2 wish Upon A Star’s continuous involvement is rigidly communicated to all family liaison officers and there are three regular meetings to offer support to family members of those affected by the sudden death of a child. All the work we do with Rhian and the charity is to avoid another tragedy like three years ago.”

Other speakers included Andrea Evans; a Staff Nurse who was on duty the night George was brought in to the Royal Glamorgan Hospital and a now close personal friend of the charity and Mrs Burke: ”There was nowhere appropriate for Rhian and Paul to say goodbye to their baby son. We did eventually find a suitable room but it was on the other side of the hospital.

”Coupled with the lesson learned that night, and the hard work the charity puts in to improving our systems, we’re working towards ensuring that every hospital in Wales has private and appropriate bereavement suites. Rhian regularly lectures and advises staff as students in the healthcare profession on how to handle situations; all this instigates much needed change.”

Emily Jones, Sister at the Paediatric Emergency Unit at University Hospital of Wales stated the day to day impact the charity is having on procedures: ”Previously, a booklet was the only source of support that we could offer. Now, with the work of 2 Wish Upon A Star, we have had relatives rooms refurbished to make the space where families can grieve more private and appropriate, donations made towards bereavement boxes where families have items such as clothing and teddies to help with the logistical and sentimental processes, and the purchase of cold cots to facilitate the child for a period of time so relatives who aren’t present can say goodbye.”

Ms Jones’ colleague Steffan Simpson, Senior Charge Nurse at UHW, praised the pilot scheme set to be launched by the charity and UHW, which will see the supply of immediate support to families who have suffered the sudden loss of a child by trained counsellors along with the support of the charity.

Mrs Burke, who has been nominated as a finalist for the St David’s Citizenship Award, closed the evening by thanking all those who have supported her and the charity over the past three years.

For more information about 2 Wish Upon A Star please visit: http://www.2wishuponastar.org/