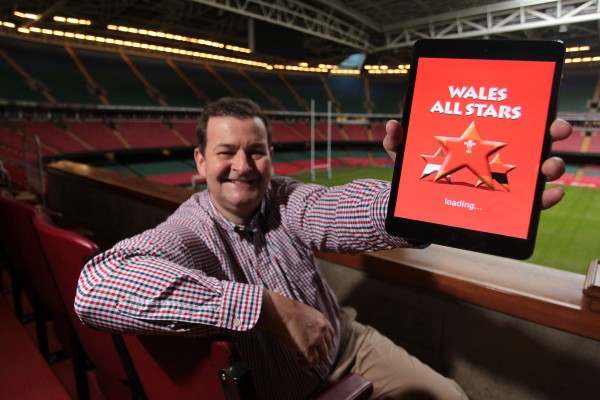 Lifelong rugby fan Phil John has developed the perfect app for the rugby-mad fan in your family.

Phil John, from Cowbridge, developed the app to build on his childhood-love of collecting football cards and stickers.

Wales All Stars allows fans to build a collection of their favourite players, past and present, from the Wales rugby team.

“For the last few years I’ve been developing the idea of a range of apps that would be analogous to the football cards that many of us collected as children. I wanted an alternative that would capture the imagination; the same way that collectible cards and stickers did when we were young.’’ said Phil, 52.

An app developer of four years, Phil has an extensive background in IT; working with firms such as NTL, CableTel and Vodafone.

When asked what inspired him to develop the app, Phil said: ‘‘It’s the perennial question for every fan of every team. Who were the best players in each position? If you could create your ultimate team from past and present, who would be in it? That’s exactly the question that Wales All Stars allows you to answer.

One of the key features in every digital card in the app is that they animate. What you might think is a simple image moves to give a sort of 3D effect. That came from me playing with images of my family on a beach in Barbados. I just started playing with ways in which I could bring the image to life.”

The All Stars app itself is causing quite a stir in the tech world, with the format proving popular with large corporations around the world.

‘‘We’ve had discussions with the National Football League (NFL) in Los Angeles and Warner Bros about Harry Potter in the US.’’ continued Phil. ‘‘It’s an incredibly exciting time. Given the international interest, I’m delighted that we’re launching the app here in Wales with the WRU and rugby-loving public.’’

Wales All Stars is being launched on iOS in conjunction with the WRU. Speaking of the licensing deal, Phil said: ‘‘The WRU has been a fantastic source of support. Their enthusiasm for Wales All Stars and how it can connect Welsh rugby fans across various digital platforms is hugely encouraging.’’

Simon Rimmer, Corporate Communications Manager at the WRU, said: “Modern technology is changing the way Welsh rugby supporters interact and we’re are always looking for new and innovative ways to engage with the fans. Wales All Stars app gives fans another exciting platform to enjoy, not just in the build up to the games such as this weekend’s Autumn clash against Australia, but whenever and wherever they choose, all year round.”

The app will be available to download free from the app store and users will get 12 free digital cards to start off their collection. Every card is based on a current player or a Welsh legend and there are 172 cards to collect. Each of the cards has a number of interactive features including animation and puzzles. Fans can build their collection and then create their own All Star team, which they can share on social media. They can also submit their team to our database where we’ll be tracking and publishing Wales’ ultimate All Star team.

Commenting on the future plans for the app, Phil said: “We’re looking to build a number of similar apps for major sports teams over the coming year. We expect to mainly focus on international rugby teams, and Premier League football teams. The app is currently only available on iOS and works on iPhone, iPad and iPod Touch with a minimum of iOS7. Next year we’ll be introducing an Android version.”