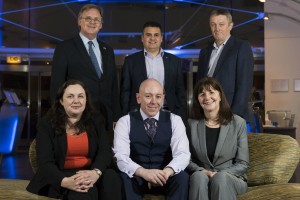 Representatives from various parties were present to debate housing in Wales and items such as Rent Smart Wales, licensing and registration of landlords and the changes to the taxation of rented homes were debated. The debate was chaired by RLA Vice Chairman and Director for Wales Douglas Haig.
Haig opened the debate by remarking on the newly announced Cardiff Capital Region City deal: “Today’s announcement is a great step forward for Wales. Let’s hope that housing is a big part of that investment and development plan.”
Current Minister for Communities and Tackling Poverty, Lesley Griffiths, whose portfolio includes housing, represented Labour and spoke to the 130-strong audience regarding the housing crisis in Wales. Griffiths took questions from the attendees, many of which were private sector landlords, regarding the effectiveness of Rent Smart Wales, the fees associated to licensing and registration, and the decision to remove the six month moratorium from the Renting Homes (Wales) Bill.
“I have only received 19 complaints regarding Rent Smart Wales.” claimed Griffiths, much to the surprise of the audience. Griffiths defended the Renting Home (Wales) Bill: “It is an improved piece of legislation. It was seven years in the making and we met with representatives, including RLA Cymru, to help shape the Bill.”
Representing the Welsh Conservatives, Mark Isherwood, AM for North Wales and current Shadow Minister for Communities and Housing, challenged Griffiths’ claims and stated that his party voted against the legislation as they felt it didn’t listen to private landlords: “We need local government to help drive up the sector, not add bureaucratic levels that slows the process down. We need to get past an anti-market approach and work collaboratively to solve the problems we are facing that works for all stakeholders.”
Representing the Welsh Liberal Democrats, Eluned Parrott, South Wales Central AM, supported Isherwood’s remarks: “The planning process is very slow in Wales. It can be disastrous.”
Parrott spoke of the need to work with local authorities to catch bad landlords and protect those who adopt good practice: “Black market individuals may drive out responsible landlords. Let’s have legislation that prevents this; we don’t want to punish good landlords and be left with the bad ones.”
Griffiths did claim that it was the responsibility of the police to catch criminal landlords, not necessarily housing officials; a remark which drew a colourful response from the audience. Griffiths did praise the efforts of all landlords who adopt ethical and correct practices, and encouraged a closer working relationship with the private rented sector through bodies such as the RLA.
Representing the Wales Green Party, Anthony Slaughter claimed that there is a housing crisis: “We have a huge problem, and all credit to the RLA and Homes for Wales for pushing housing up the political agenda.”
AM Candidate for Cardiff West Neil McEvoy from Plaid Cymru, argued that the valleys can be used to help Cardiff’s housing crisis: “Why are the valleys being ignored? These areas, which are in close proximity to Cardiff, can help solve the problem. A regional plan is needed.”
Speaking on the success of the evening, Douglas Haig said: “Tonight showed to all the parties just how hard landlords work and how passionate they are about the changes that are being made. Most landlords own just one property and often support the tenants in more ways than just giving them a roof over their head. Good landlords are frustrated that they are constantly being lumped together with the criminal ones. We want effectively-enforced and well thought out collaborative legislation to drive them out, not just more red tape that slows and overcomplicates the process. Hopefully, this is a pivotal moment for all the parties that they now understand the private rented sector is one they should be working with, not against, and that the Residential Landlords Association is at the front of the campaign to ensure that landlords provide safe and secure homes in an environment that allows them to invest for the future of their families.”