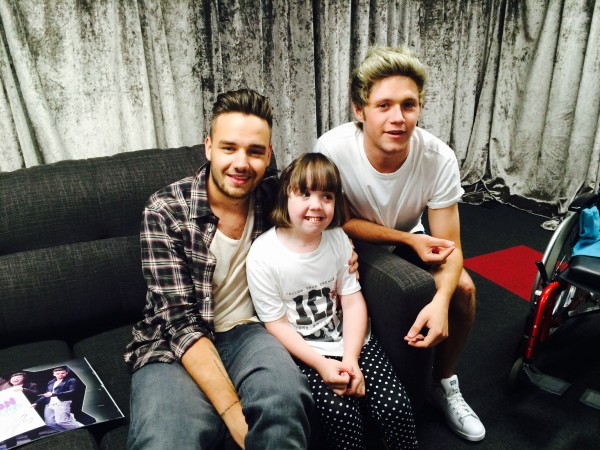 Rugby star Mike Phillips arranged for some very lucky children from the children’s charity Follow Your Dreams to meet the members of One Direction at their concert at the Millennium Stadium last Friday and Saturday. The Wales star, who is patron of the Church Village based charity and has been deeply involved in helping the children achieve their dreams over the past two years, organised for 17 children to go to the two concerts that were held in Cardiff’s Millennium Stadium over the weekend.
After a chance meeting with his Twitter nemesis Niall Horan at a bar in New York last year Phillips, who has since patched up his differences with the megastar, has become friendly with the band and asked if they would be willing to do a meet and greet with some of the children from the charity.
“It was such an wonderful couple of days,” said Diane Blackmore, CEO of Follow Your Dreams. “We are so grateful to One Direction for spending some of their precious free time with us. They have such busy schedules and it was amazing of them to take the time to meet the kids and give them a once in a lifetime experience. The concerts were incredible and all the kids had so much fun. As ever, we are so grateful to Mike who is a wonderful patron who is always thinking of us and what he can do for the children.”
The children weren’t told prior to the event so that it would be a surprise. Before the each concert some of the children were taken backstage to meet the band. On the Friday night Amy and Follow Your Dreams volunteer’s Caroline and Sophie went to meet the band and on the Saturday Ashley and her siblings Saul and Maddie got the opportunity to meet them as well. Niall, Liam, Harry and Louis had photos with the children and presented them with a signed a t-shirt and program which Follow your Dreams will be auctioning off to raise money.
Ashley is in a wheel chair and the charity previously got local printing company Trustmark to make her custom designed One Direction wheel covers designed for Ashley by local artist Lydia McCarthy. On seeing these the band members were thrilled and immediately signed the wheelchair for Ashley who was over the moon.
Mike Phillips also paid for Amy Johnson’s ticket to the concert. Amy does her own fundraising for the charity has recently raised £2,000 from selling hand knitted toys at local fates.
“Mike Phillips has always been my hero,” said Amy. “But now he’s my superhero!”
The charity will be raffling off the signed t-shirt via a £1 donation via Text Giving. To enter text ONED15 £1 to 70070.
Follow Your Dreams is a national charity operating in England and Wales that inspires children and young people with learning disabilities to follow their dreams.
Their vision is for children and young people with learning disabilities to recognise their potential, be ambitious and be provided with the opportunities to follow their dreams. The charity focuses on children’s abilities, growing and developing skills through the delivery of creative and interactive events, dreams and workshops.