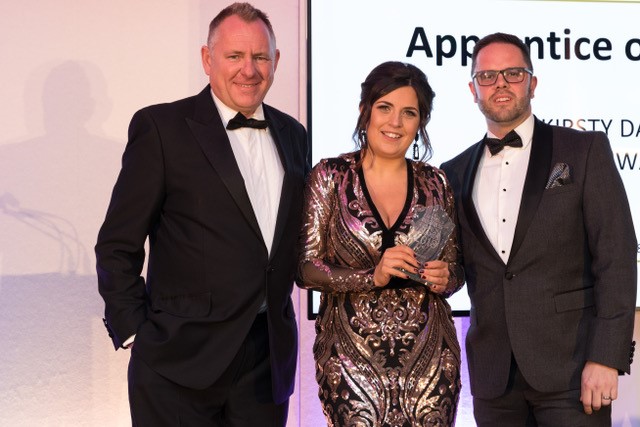 It is often said that school isn’t for everyone. Many people find their calling later in life through vocational means, volunteering and work-based learning. For one lady from south Wales, it is the latter that helped her identify where she wanted to go in life.

For 32-year old Kirsty Davies, work-based learning has helped shape her future at a time when all other avenues seemed to come up short. Kirsty found her ideal course via Educ8, the leading training and apprenticeship provider which is headquartered in Tredomen near Caerphilly.

Speaking of her journey, Kirsty said: “I left school when I finished my GCSEs and started a hair and beauty course combined with a job. I had my first child and fell out of love with the industry and the direction I had taken. After having my second child a few years later I had a series of casual jobs but nothing that I would define as a career. I had my third child a few years after that and I was out of work for a period of time and after numerous attempts, I found dead end after dead end.

My Job Centre put me in contact with Educ8 Training. Within a week I was on a health and social care course that was right for me and within eight weeks my confidence had skyrocketed to the point where I had gained employment with Help4Wales Foundation in Caerphilly.”

Within six months, Kirsty had been nominated by her employer for Apprentice of the Year at the Caerphilly Business Awards where she clinched the prize.

“To come that far in such a short space of time was an absolutely unbelievable boost of confidence for me, especially as I had spent so long out of work.”

For Kirsty, each working day is an early start. Aside from getting three young children ready for school, she uses public transport to get from her home in Rhymney to Caerphilly on a daily basis which is a one hour and 20-minute journey in itself.

“It is an early start, with 5.30am being the normal time I get up. Once my two sons and daughter are ready for school, I drop them off and get myself over to Caerphilly, the working day begins I then tend to get in just after 6pm where my other job as a mother starts.

“I have fantastic support from my mother as well as breakfast clubs. Without them, I would not be able to do what I do.”

Discussing her role as Trainee Supervisor, Kirsty said: “I really feel as though I’ve found my calling. I help support victims of domestic violence and abuse as well as the homeless. I have helped launch the rucksack appeal and I have been blown away by the generosity of donations from clothes to toiletries.

“Working on these types of initiatives in an autonomous way has really helped me learn and develop as a professional. Having found Educ8 and the course on offer, it has pushed me to achieve what I really did not think was possible. I am so grateful for what it has afforded me.

“However, it is just the start. I’ll always keep up my development as there is always room to learn. I feel that with all the years I was out of employment and education, I missed out. So there’s lots of time to make up for.

“I used to have anxiety attacks and problems with my confidence but I really couldn’t tell you the last time I had these problems.”

Educ8 employs 125 people across two sites in Wales and has an established reputation as a major provider of apprenticeships and vocational training courses.

Educ8 offers employers a series of interlinked opportunities such as Jobs Growth Wales and a range of Apprenticeships Programmes which provide a seamless solution to staff recruitment and development requirements across many sectors.