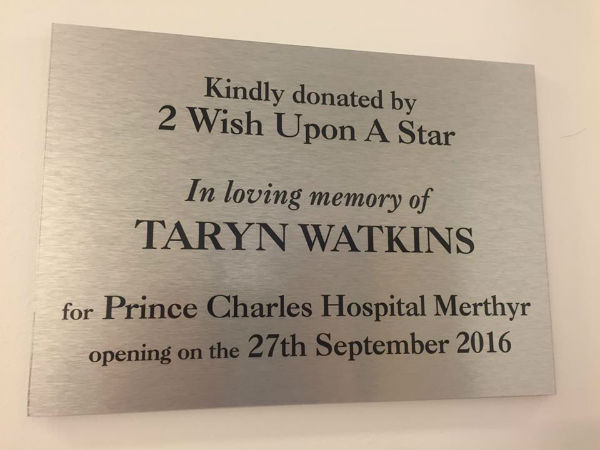 Bereavement support charity 2 Wish Upon A Star has opened a refurbished family room at the Prince Charles Hospital in Merthyr Tydfil on the 27th of September.

The room is designed to give families a private and comforting space where loved ones can wait for news, and when necessary, be together to say their final goodbyes. The opening was dedicated to the memory of Taryn Watkins.

Two year old Taryn died suddenly in her sleep on the 8th of April 2015. The family have since dedicated themselves to raising money to support 2 Wish Upon a Star, and to date have raised over £5,000

Taryn’s father, Gareth Watkins spoke at the opening ceremony: “We are proud to have been asked to be a part of the opening of the family room in honour of our daughter Taryn who passed away at the hospital a year ago.

“The help and support that we have received from 2 Wish Upon A Star has been phenomenal from the first instant with the memory box and the George cuddly toy, which our eldest daughter Lyla renamed after Taryn. The charity provided us with both support and counselling which have played a vital part in helping us come to terms with something no parent should have to face. I can honestly say I don’t know how we would have made it through without the help and ongoing support of 2 Wish Upon A Star.

“The support we received has inspired us to host numerous fundraising events for the charity, helping to fund rooms like this, that play a tremendous part in supporting families and helping keep the memory of our loved ones alive.“

Speaking of the room opening, 2 Wish Upon A Star founder, Rhian Burke said: “Every family deserves the right to privacy and peace during the worst moments of their lives. Sadly this is lacking across much of Wales, but we’re working hard to address the issue. The family bereavement rooms are situated in the Accident and Emergency departments and our aim is to have one in every hospital across Wales.

“The rooms are painted in comforting colours and furnished so not to feel too clinical. They are fitted with tea and coffee making facilities, as well as toys for children to use. Essentially, the rooms also contain literature that families can take away with them, directing them to all the available support they will need as they begin the grieving process.”

2 Wish Upon A Star now works with 14 of the 15 emergency units across Wales and has supported over 50 families.

Rhian continued: “Gareth and the family have been amazing and their work to fundraise and raise awareness makes a huge difference to the charity. Without the support of such dedicated fundraisers and volunteers, 2 Wish Upon A Star would not be able to help so many families in need, and we are proud to open the Prince Charles Hospital family room in Taryn’s memory.”

2 Wish Upon A Star was first established in 2012 by founder Rhian Burke to raise money for the improvement of bereavement services for families who have suffered the sudden loss of a child. The money raised for the charity goes towards helping those who are in need of immediate shock and trauma support and to improve the bereavement facilities in local hospitals and Accident and Emergency departments.