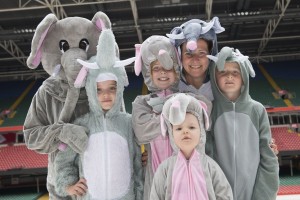 On Saturday 13 August 2 Wish Upon A Star will attempt to break the Guinness World Record for the largest gathering of people dressed as elephants. The event aims to raise awareness of the charity and its important work supporting suddenly bereaved parents. The organisers have set an ambitious target of getting 2000 volunteers dressed as the charity’s elephant mascot, Gorgeous George, named in memory of founder Rhian Burke’s son.

The charity will be inviting children from schools and youth groups across Wales, but anyone is welcome to attend the event and be part of a world record attempt. Details on the Guinness eligible costume rules can be found on the 2 Wish Upon A Star website.

2 Wish Upon A Star founder Rhian Burke spoke of the importance of awareness in the fight to improve bereavement services across Wales. Rhian said: “An important part of our work at 2 Wish is to raise awareness of child bereavement and the lack of support for suddenly bereaved parents. The first step is to get people talking about the issue and this event will hopefully provide an interesting talking point. The 2 Wish Upon A Star Mascot is an elephant because elephants never forget, and neither do we. Child bereavement is also the elephant in the room; it’s something that people are understandably afraid to discuss.”

2 Wish Upon A Star now works with 14 of the 15 emergency units across Wales and has supported over 50 families in the last 12 months.

Rhian continued: “We are calling on the public to help us spread the message that 2 Wish Upon A Star is there for anyone who may need help, support or advice. We are aiming to get 2000 people dressed as elephants on the stage at the Principality Stadium. I’d ask people to come and be part of something special; don your elephant costume, stand with us and help us make a statement that’s heard across the nation, no family left behind.”

The world record attempt is one of a host of community events granted by Principality Stadium each year.

“The 2 Wish Upon A Star charity has come up with a great idea for a world record attempt this year, which really gets to the heart of what their charity is about and we are looking forward to seeing them break the record in style.”

Gates at the stadium will open at 2pm with the record attempt commencing at 3pm. Tickets are free and are available from Ticketmaster through the charity’s website www.2wishuponastar.org Elephant costumes can be bought or home-made but don’t forget to check the rules for eligibility for your elephant costume in advance and remember elephants under 12 must be accompanied by an adult elephant.