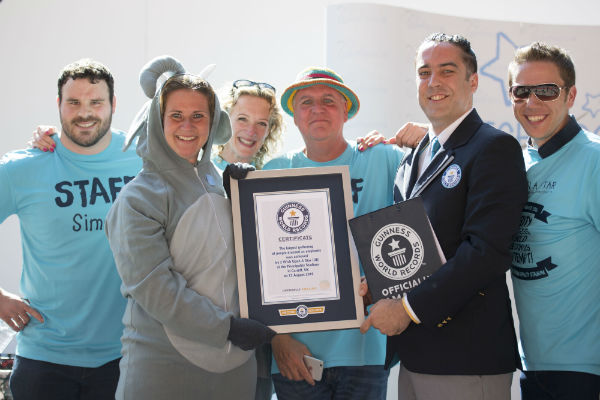 Child bereavement support charity 2 Wish Upon A Star has broken a world record at a recent event held at the Principality Stadium.

On Saturday 13 August the charity broke the Guinness World Record for the largest gathering of people dressed as elephants with over 385 children and adults donning their tusks, trunks and tails to join in.

The event aimed to raise awareness of the charity and the important work it does supporting suddenly bereaved parents.

The charity set a modest target of 250 elephants and is thrilled to have had so many members of the public take part. Founder of the charity Rhian Burke said: “We are thrilled to have beaten our target and hosted so many elephants at this iconic Welsh venue. I’d like to thank everyone that got involved by dressing up, the entertainment, JPJ School of Dance and everyone who turned out to support the charity. You’ve all be a part of something really special that will never be forgotten.”

Gates at the stadium opened at 2pm where participants got to enjoy the singers, dancers, balloon makers and bouncy castles. The record attempt was held at 3pm where 385 sat together in the stands to send the charity into the record books, earning all participants a medal and the opportunity to say that they were a world record breaker.

Rhian continued: “An important part of our work at 2 Wish Upon A Star is to raise awareness of child bereavement and the lack of support for suddenly bereaved parents. We chose an elephant as our mascot because they never forget and neither do we. Child bereavement is also the elephant in the room; it’s something that people are understandably afraid to discuss. The first step is to get people talking about the issue and we feel that this event has certainly made an interesting talking point.”

2 Wish Upon A Star currently work with 14 of the 15 emergency units across Wales and has supported over 50 families in the last 12 months.

The event was one of a host of community events granted by Principality Stadium each year.

“The 2 Wish Upon A Star charity came up with a great idea, it got to the heart of what their charity is about and has helped spread the word of the important work they do. We are thrilled to have helped them break the record in style.”