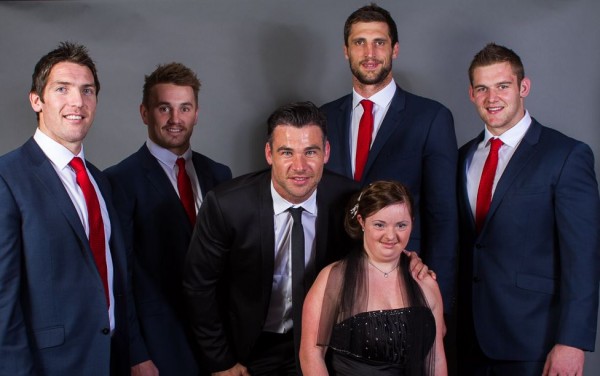 Rugby star Mike Phillips hosted a fundraiser at the Vale Hotel & Spa in Hensol for children’s charity Follow Your Dreams. The event was a huge success and raised a staggering £15,000 for the Church Village based charity.

Mike Phillips is a patron for the charity, and has been deeply involved in helping the children achieve their dreams. The week prior to the ball, Phillips organised for some of the children to come to watch the Captain’s Run pre-match warm up at the Millennium Stadium.

As well as entertainment from world renowned Harpist Glenda Clwyd and Bois Goetre-Hen Male Voice Choir there was a raffle with over £4,800 worth of prizes, as well as an auction held by Jason Harrold from Heart FM with donated items ranging from signed rugby jerseys to trips on a private yacht.  Surprise video appearances from celebrities including Piers Morgan, Vinnie Jones, UB40 and Shayne Williams were played.

Phillips brought along five of Welsh teammates; including Luke Charteris, James Hook, Dan Lydiate, Jonathan Davies and Jamie Roberts. The willing rugby stars took to the stage and co-host Justine Jones from Sexy Mac put the players through their paces with a question and answer session. Members of the audience asked the players questions about this week’s upcoming battle with the All Blacks, as well as what was their most memorable match. The rugby heroes finished off by stitching patron Phillips up and goading him in to performing his signature song; the opening tune of hot comedy Only Fools & Horses, much to the entertainment of players and guests.

“When we started planning this event, we could never have predicted the success we achieved.” said Diane Blackmore, Chief Executive of Follow Your Dreams. “We were overwhelmed by the support from local businesses who graciously donated gifts and their services. We are incredibly proud of our Patron Mike Phillips, the support he gives us is quite unique and the children love meeting him at our events. We have been inundated with messages of support since the ball to say how much everyone enjoyed the evening and we are hoping it will be an annual event. It truly was a great night!”

One of the guests was Amy Johnston, who first met her rugby hero Mike Phillips when she was just one year old. She met Mike Phillips for the second time in a meeting arranged by Follow Your Dreams where the pair chatted over afternoon tea at Hamptons in Penarth.  Amy is ten and was fostered when she was six weeks old. She was born with multiple complications and had to be ventilated until she was three and was not expected to live.

“Over the last year Amy has had big mobility problems and Follow Your Dreams workshops have helped her through when she couldn’t do other things such as play sports.” says Amy’s mother, Mrs Johnston.

“She was so excited about the ball, it was just like she waiting for Christmas. Meeting Mike Phillips has given her such confidence and he has been so amazing with her. While all her friends have posters of One Direction on their walls, she has pictures of Mike. She has had a teddy she calls Mike Phillips for quite a while. This teddy always goes to theatre with her, with her when she has to have surgery and if she is at all stressed, she takes the teddy to bed with her. She just idolises Mike he has definitely made her dreams come true.”

Follow Your Dreams is a national charity operating in England and Wales that inspires children and young people with learning disabilities to follow their dreams.

Their vision is for children and young people with learning disabilities to recognise their potential, be ambitious and be provided with the opportunities to follow their dreams. The charity focuses on children’s abilities, growing and developing skills through the delivery of creative and interactive events, dreams and workshops.